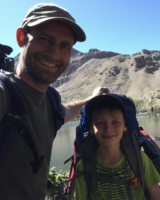 Dane Roberts is in his 19th year in education and his 5th year leading Monticello Academy, first as the director of the original campus and now overseeing both campuses as executive director. With the efforts of an incredible faculty and staff, over the last five years Monticello Academy has seen growth in academic achievement, enrollment, and parent satisfaction.

Mr. Roberts is passionate about recruiting top talent, developing teaching excellence, and using great curriculum–especially Core Knowledge. He loves spending time with his wife and five children in the outdoors.